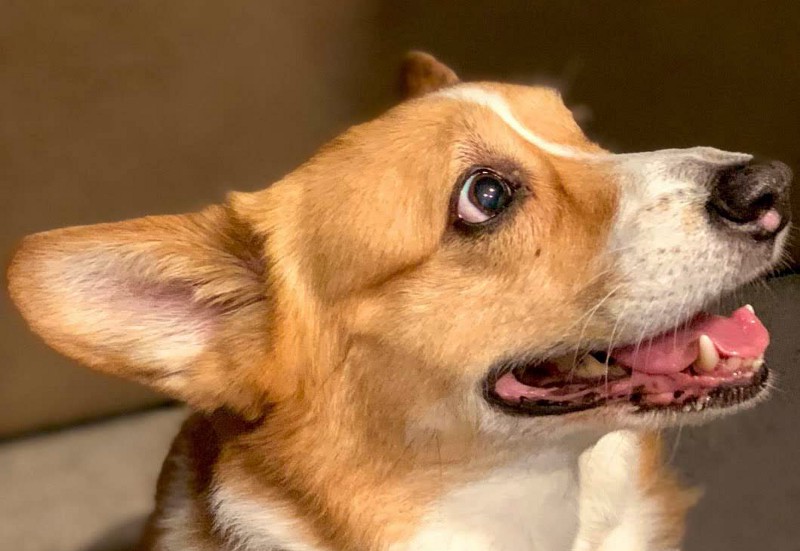 My dog Frobolome died a few weeks ago at age 11, and it’s been rough.

He was named after one of the best typos I’ve ever seen. A teenager on a forum I was on posted his sandwich recipe on a “favorite sandwich” thread, which included several ingredients he had clearly only heard spoken and never seen in writing, including “cobasa” sausage and “two slices of frobolome cheese.” “mmmMMMmm” he concluded, after listing all the ingredients.

It seemed like a good name for a corgi puppy. 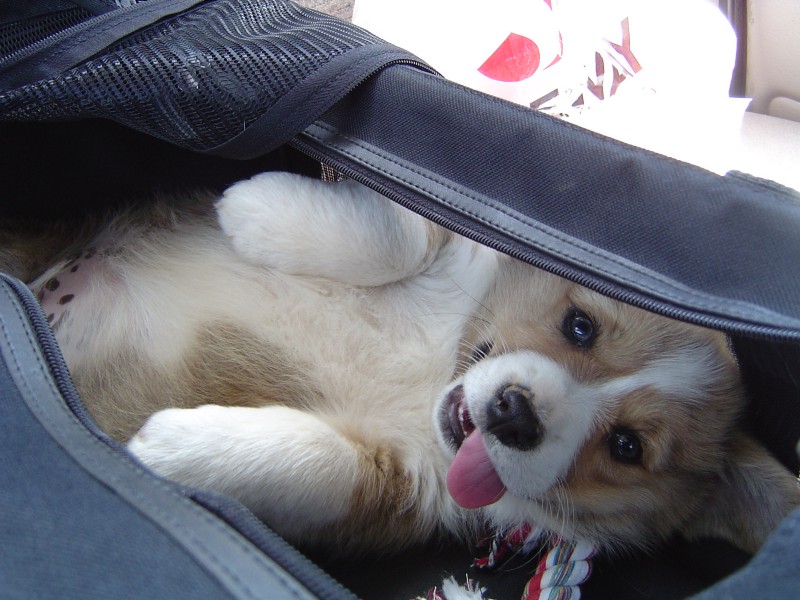 We brought him home in this carrier we borrowed from a friend. He destroyed it.

By all objective metrics he was a terrible dog. Despite being a corgi, he was awkwardly lanky, large, and unfluffy. He refused to be housetrained for the first two years of his life, not because he didn’t understand the concept, but because he didn’t see the point.

For much of his life, his chewing was out of control. He destroyed the carrier we brought him home in. He would destroy “indestructible” chew toys. He assumed for some reason that anything made of wood was a chew toy, destroying several of the kids’ toys.

He barked incessantly at the slightest provocation, such as someone walking by the house, or a doorbell ringing on TV. As you can imagine, this made the first year with each of our newborn sons hellish.

We put a lot of effort into training him out of these things, thinking he was just slow, or didn’t understand, but we were quickly cured of this misconception when we realized every time we had a treat in our hands, he suddenly became extremely intelligent and responsive to our every command, often throwing in bonus tricks just in case.

He was an incorrigible food thief. He would never bite or harm any children no matter how much they battered and annoyed him, but he would happily snatch a pizza out of their hand with surgical precision. Our whole family changed our eating protocols to revolve around preventing dog theft until it became part of our subconscious. When we went on vacation without the dogs, and food fell on the floor, we would become disoriented to find it still there moments later, until we realized we would have to dispose of it ourselves.

When you took him for a walk, he would bolt like a rocket at the beginning, giving a false impression of how much energy he had, causing you to miscalculate when to turn back, and then just flop when he was done, forcing you to carry a 40 pound dog home.

Early on, we were told that corgis are intelligent dogs and that they need a “job” to do or they will create one for themselves, that you might not like. Some suggested activities were herding or agility (dog obstacle courses). So we took him to a “herding instinct test” where dogs are tested to see how much herding instinct they have to see if it’s worth bothering with training in the first place. Some dogs immediately had an instinct to start herding the sheep, some dogs just chased them, some dogs were uninterested. Our dog, once put in the pen, ignored the sheep entirely and excitedly began to eat sheep poop. He did not pass.

By all tangible measures he was an absolute failure as a dog.

People talk a lot about what dogs give you — loyalty, affection, companionship, and much more. But I think the biggest gift is what they let you give them.

Having a dog is an opportunity for you to give someone or something a good life. As you become familiar with the world and its ways, you come to the sad realization that it’s often complicated, difficult, or sometimes impossible to do this for yourself or other humans you care about and have cared about, and it is demoralizing to watch your own flaws, or circumstances outside your control, ruin all your best efforts to do so. A dog gives you a chance to get it right for once, in one small window of time.

Dogs have short lives and extremely low expectations. They will consistently give you 10/10 ratings or higher for feeding them twice a day, taking them outside, and petting them on the head now and then, and rest contentedly believing they are living not only their best life but the best of all possible lives.

When Frobolome was a pup, it took longer than usual for his ears to go up (corgis are born with floppy ears that get their stand-up triangle shape after a few months) and the breeder suggested giving him some yogurt (for the calcium). I don’t know if this had any effect, but man, he loved that yogurt. 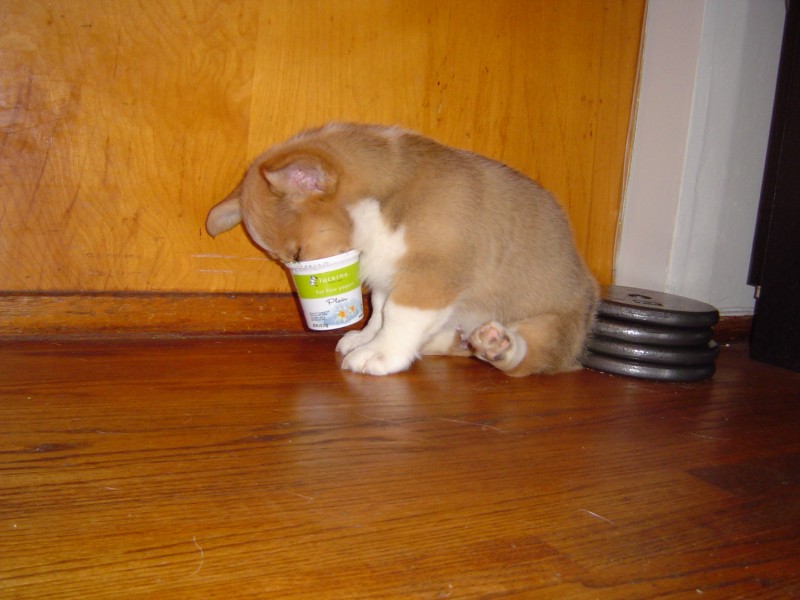 He couldn’t get enough of it. 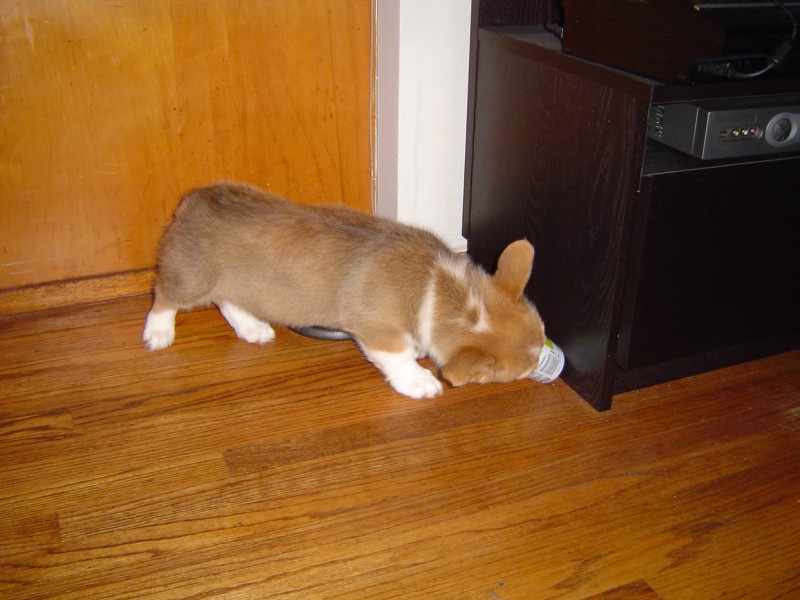 Anyway, his ears did go up, probably not as a result of the yogurt. We found other treats. It turns out he’d actually accept pretty much anything as a treat, and dig into it with the same gusto — cheese, carrots, wood, whatever.

In the last couple years of his life, I was on a fitness kick, and part of that meant I was having one cup of Greek yogurt a day for breakfast. Remembering his youthful enthusiasm for it, I once tossed him a cup to lick clean. He loved it so much it became a daily ritual. He got so used to it he would bark at me if he thought I was taking my sweet time handing it over. But once he got it, he acted like this was the best moment of his day, if not his life. 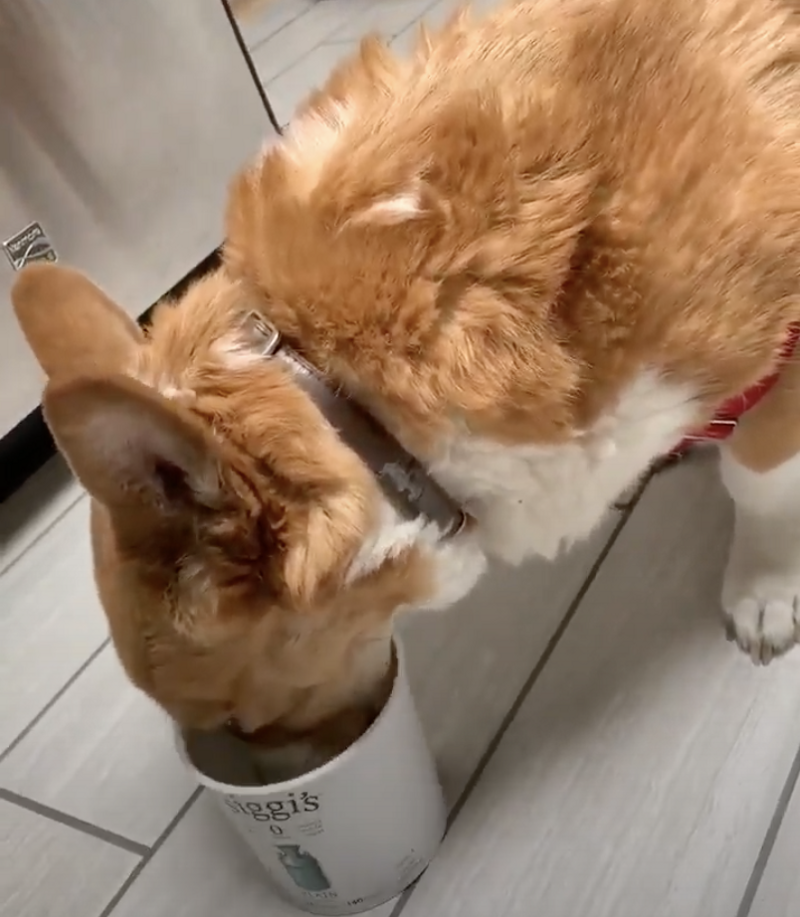 This is actually one of the quart yogurts, he hit the jackpot that day.

I thought a lot in the past few weeks about what I really missed the most about him, and I did miss how he made me laugh every day, how he was always there, how chill and mellow he was with our loud, wild kids and all the crazy things we asked him to do over the years, but the other day I realized what I missed the most was the ability to keep giving him a good life.

In his last couple of days he was in a lot of pain and I’m still coping with guilt, going over whether I caused this somehow by making the wrong medical decisions for him at tons of little steps along the way. There’s some comfort in knowing that at least he is in no more pain. I am glad he is not suffering painfully through a bad life. But I still wish I could keep giving him a good one.

He was a terrible, greedy, disobedient dog who barked furiously at the drop of a hat and constantly stole food. But he loved and trusted us unconditionally beyond what any human deserves, even during his worst suffering. He was truly, unironically, a blessing, a gift, a dog.