What If Dragons Wore Caps 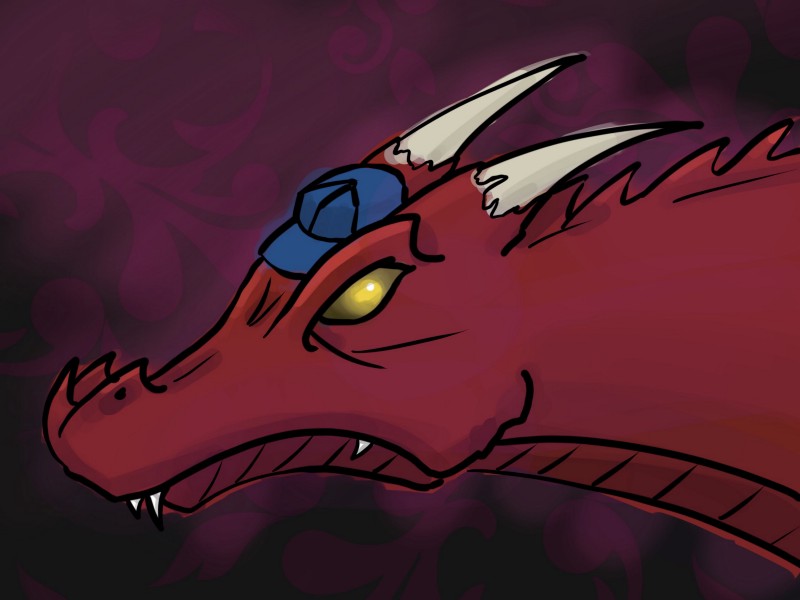 This dragon is wearing a human-sized cap.

What if dragons wore caps? Before we can explore this important question, we need to dive into some background, so bear with me.

There was only one time I ever won a championship and it was in a browser-based war strategy game in the early 2000s.

I played my first season on a random team (you get assigned to a team and your scores add up but they don’t have to interact with you at all, and this team did not), spent way too much time on it, like I tend to do, got pretty decent, and started hanging out on the game’s IRC chat talking to all the other people (on other teams) who played way too much. It was a lot of trash talk and bullying and pervert talk because it was all guys, but to me, it felt good to be included in something, because I had really low standards.

At the end of the season, people started putting together teams for the next season, and the top players put together a sort of “dream team.” As you could guess, I was one of the people that felt like they should have been on it and wasn’t. There were actually a handful of pretty high ranking players that were disappointed to not be invited to the dream team, despite being good players and nice people. That might have actually been why they weren’t invited because the dream team was composed of the biggest assholes in the game.

So I made a list of other high ranking players that were also nice and easy to get along with, and also disappointed by not being picked for the dream team, and messaged them one by one and said “Hey, let’s form our own team, and kick their smug little asses.” And we did.

I tell this story not to brag, even though we beat hundreds of other players and it proves that I can be good at games when I try, but because it provides needed context for an important topic we need to talk about: what if dragons wore caps?

As you can see, it’s impossible to discuss this question without having first pointed out that I assembled the team that won the championship. We didn’t use dragons because they weren’t in fact ever introduced to the game, but we did pull off a stunning down-to-the-wire finish proving you don’t have to be a dick to win championships.

Probably the key question here is, what size would the cap be? Would it be sized-up proportional to the dragon? Or would it be a standard baseball cap, made by humans, for humans?

If the latter, it opens up a lot more questions as to where the hat would sit. Would the tiny cap be placed right on top of the dragon’s head, between the horns perhaps? This might be a human-centric fallacy, to put it roughly where we put our own hats, not realizing that, unless the dragon has a central horn or spike, the cap has nothing to catch on and will fall off upon any movement.

From a dragon’s perspective, it might make more sense to hang the cap on a horn or spike. If the cap is adjustable and has a hole in the back, using that hole to hang it on a horn might be even more stable.

Once we’ve accepted that the dragon might wear their cap on a horn, instead of centered on their head, this opens up even more possibilities, as dragons often have multiple horns and spikes. Can they then wear multiple caps? Here we enter uncharted territory.

Do there need to be rules about the substance of the caps? It goes without saying that a dragon cannot wear a San Francisco Giants cap on one horn while having a Los Angeles Dodgers cap dangling from another horn. This would be an abomination.

But what about caps from different sports? What about brands? Can a dragon wear a Dallas Cowboys hat and a Philadelphia Phillies hat? What about a NY Giants and SF Giants hat? What if they wear a John Deere hat and a hat from a competing tractor company I’m not going to look up?

What about political caps? Obviously the infamous red hat marks a dragon as a buffoon only fit for comic relief, the sort of dragon that tells crappy riddles or “slyly challenges the tropes of fairy tales” by having a predictable “funny” trait like seasonal allergies or slipping on banana peels. I think it should also be agreed that parodies of those hats are absolutely meaningless, as the text is hard enough to make out on humans, let alone on a creature 100 times the size of a human.

It’s clear that dragon caps are a very complicated issue that requires ongoing, evolving discussion and constant amendments as we make new discoveries and as society changes.

That’s why I propose a government commission, accountable to voters, to regulate caps on dragons.

People should be chosen for this commission based on their qualifications and expertise in caps, logos, and dragons, certainly, but the selection process should look beyond mere credentialism and not just pick people with the MOST degrees or the BEST degrees, giving them a spot even if they are jackasses that brag about how they are just going to steamroll the competition, but should pick people who are nice and get along with people, who will be laughing at the end when they win the championship… of uh… regulating dragon caps.

Thank you for your time.